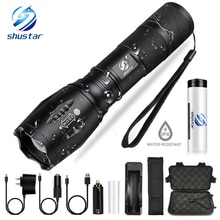 I purchased the torch from Alibaba Express.  This was not the first time I had ordered a product using their services so I was more confident about the transaction this time round.  I needn't have worried as the torch arrived in less than 10 days.  It is becoming all the easier to acquire goods from China and the delay with regard to the delivery time is hardly of concern as long as you are ordering from a respectable company.  I suppose the problem is finding such a company, but so far my own experiences have been fine, so, apparently, I have yet to come across a bad supplier by the looks of it.  No-doubt caution is advised if wanting to place a large order.  I think it would be wise to build up to such an order after you are fully confident smaller orders placed with the same company arrive without any problems.  As you can interact with your supplier then in time you should be able to build up a rapport and to be confident in their abilities.

Their website is a surprisingly slick operation. It loads fast, there is ample information and choice, with convenient ways to pay for goods, I even received $3 off my first purchase. Something I found a bit odd, which made me pause before placing my 2nd order for the torch, was the unavailability to pay by PayPal. Why this seemed to strange was that I paid for my first purchase of some solar lights using PayPal. It seems this s accountable to the Chinese merchants themselves. What I can gather from this is the Chinese supplier of the torches doesn't accept PayPal. I didn't like this at first, but I changed my mind afterwards and used my Visa Debit Card. I shouldn't think anything will go amiss, though I must admit I don't like using my debit card on-line.

Picking the right torch was a little confusing, but not by much. It is also possible to change the currency in your account settings, making it a lot easier to see exactly how much everything costs. Although there are also suppliers from Russia and Spain they won't ship to the UK - or at least the ones I tried wouldn't.  I eventually chose the V6 package with all the bells and whistles for $14.99, though the final amount was $15.79 (£13.07) as there was an extra charge for something or other.  Still great value for money though when you consider the package came with 3 methods of charging, a re-chargeable battery, 3AAA battery holder, torch, free rubber strap for use on a bike, a nylon case so you can attach it to your belt and a black case.

I received the package well within the 20-40 days it stated on the website - within 10 days if I remember rightly.  These are not light items so it is remarkable to me they can send these torches with FREE delivery.  Ordering by bulk is something I have yet to do but no-doubt beyond a certain weight (and maybe the amount has something to do with it) there will be substantial shipping costs to consider, but for those of us just purchasing one item at a time this is a godsend.

The power of the torch is quite astonishing.  Stupidly I left the very tight plastic wrapper on the battery so I thought at first the torch wasn't working!  Embarrassing.  Once I had got over that hurdle I charged the battery using the DC Charger, which, thankfully, was suited for the UK plug socket.  After a while the charger showed green (red is charging) and it was ready to try out.  Not that I know much about torches, but the strength of the beam on the highest setting is so strong it is concerning (to the neighbours).  I don't think in normal use you would need to place it on the high setting - medium or dim should suffice.  When I zoomed in - which you can easily do one-handed as the top section just slides forward and back - the beam became concentrated, allowing me to see all the way to the bottom of the street (a few hundred metres).  When sliding the zoom back so the beam is spread out wide the width is again more than enough.  You really need to try these type of torches out yourself.  I can't see how you can fail to be impressed with the performance.  I wouldn't go so far as to say it is breathtaking, but then again, maybe I would.  There are a number of settings you can choose.  You do this by switching the torch on and then pressing lightly on the same switch.  Each time you press it will cycle through the modes - High, Medium, Dim, Strobe and SOS.  When you switch the torch on it does not choose the highest setting, which seems fair enough to me as it does come across as a bit of an overkill.  On the lower settings the battery will last longer, presumably.  A great addition to the household and I keep it in the kitchen to hand.  The fact that it is neatly packed away in its own case is appreciated as I shouldn't then lose any of the accessories.  Great torch and a real bargain it seems to me.

For further information please use the link above and scroll down the page a little. There is extensive manufacturing blurb available, along with a considerable number of pictures. By the time you have worked your way through it all you will be much more knowledgeable about the torch and its capabilities.